Amber and natural beauty of this gemstone was and still is cherished by many people. It is a fossilized resin, which comes from old trees. There is no clear understanding as to why trees produce this resin, but it is thought that it might be part of plants protection mechanism. Due to processes of oxidation and polymerization this resin turns into Amber over many years time. Consequently, large rivers wash out this resin from forest ground into the sea where Amber is being collected by people.

It is worthwhile to mention that Amber is not only being used to make jewelry, but also it is added as an ingredient to perfumes and it is also used in folk medicine for its healing properties. In fact over the years it was believed that this gemstone has even magical powers. The history of this gemstone dates back to even 11 000 B.C. since some worked Amber is found in archaeological sites. Most of real Amber that is found today is between 30 and 90 million years old.

Sometimes it happens that Amber contains inclusions of plants and animals; however they are quite rare. Since this natural resin is quite sticky some bugs or plants become trapped in it naturally. Once resin hardens over time it creates perfect conditions for fossils to be perfectly preserved. So Amber inclusions provide scientists with valuable information about what species were existing many years ago. Many jewelers prefer Amber over other gemstones because it comes in many different colors and it is relatively soft material so it not too difficult to make accessories from it. The other benefit of this resin is that large pieces of it are available and they are cheaper than compared with other gemstones. Since Amber is never the same in appearance jewelry made from it also has unique look every time.

Amber-colors even though the main color of Amber is honey it also come in many different shades like dark brown, light yellow and orange. The rarest colors of this natural resin are red, blue and green, which are considered to be more desired. Some sources even distinguish even up to 256 different colors of Amber. It is worthwhile to mention that Amber can be both transparent and nontransparent. This gemstone is mostly valued for its imperfections like bubbles, cracks, inclusions, shadows, and other reflections.

The age of Amber varies based on its origin. Dominican Amber is younger than Baltic and its age is between 24 and 30 million years. Some Baltic Amber is almost two times older since its age varies from 35 to 60 million years. Baltic Amber is considered to be the most valuable since it contains Succinic Acid. The highest amounts of Baltic Amber are found in the coastline of the Baltic and the North Sea. About 90% of Baltic Amber comes from the Kaliningrad region, which is situated near the Baltic Sea. Quite commonly Amber is referred to as gold of the Baltic Sea. The age of Copal, which is not fully fossilized resin, might vary from 50 years to even 1.5 million years. Since it tends to be much younger in age than real Amber it is quite commonly referred to as immature Amber. Quite commonly some vendors try to sell it as real Amber so it is important to know how to distinguish them.

Amber has a couple of properties and characteristics that are unique to this gemstone. One of these features is that this natural resin contains an acid known as Succinic. Succinic Acid is responsible for a couple of different processes in the body and it is quite commonly used for pain relief and Arthritis. Baltic Amber is one of the best sources of this acid naturally and it might contain from 3% to 8 % of Succinic Acid by weight. Another interesting fact is that you would need a temperature of about 300 Celsius degrees in order to melt Amber and to make it softer 150 degrees temperature would be enough. The other quite interesting feature of Amber is that it is able to float in water, which is salty. This happens mainly because it is relatively light in weight. It is weight is only about 1/3 of a stone. Due to this gemstone's ability to float in salty water many people do the Saltwater test, which helps to determine if it is real or fake amber.

The other quite unique feature of Amber is that it has the ability to attract tiny pieces of paper when it is rubbed against the natural cloth. This happens mainly because Amber electrifies negatively, which also provides some explanation as to why this natural resin might have medical benefits. 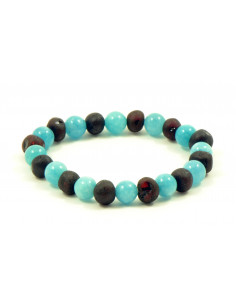 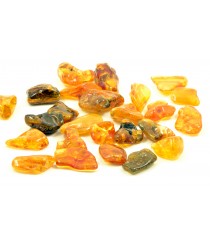 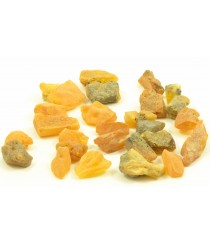